Building a Career with ATEC 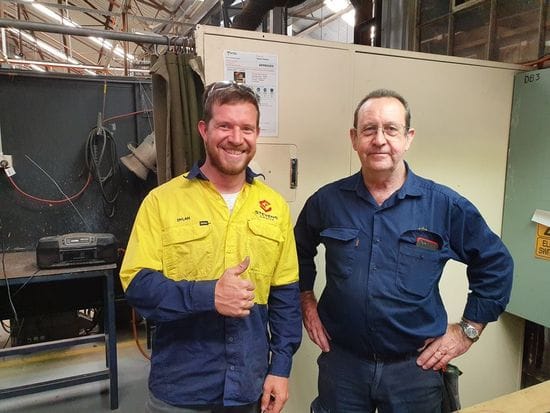 When his employer approached him to complete his apprenticeship in boiler making, Dylan jumped at the chance to undertake further training in his chosen field.

As a construction steel installer with Stevens Structural, Dylan has a passion for working with metal. He draws satisfaction from starting a project and seeing it progress all the way through to completion. Dylan loves to take a step back and see what he has been able to create, especially when it's a large government project that he has contributed to.

Dylan began his boiler making apprenticeship in October 2017. The apprenticeship allowed him to develop a better understanding of metal, and practical knowledge of how to work with metal. Dylan has since honed his skills in welding, thermal cutting, abrasion, soldering, and more.

Dylan especially enjoyed stick welding and arc welding, having the chance to spend a full four days being shown how to work with the tools and putting the techniques into practice.

One thing Dylan didn't realise when he began his apprenticeship was that he would also be building new friendships with both trainers and fellow trainees.

Dylan collaborated closely with his classmates, giving each other advice and enjoying the shared experience as they learnt new skills together.

So too, Dylan developed close working relationships with his trainers, who were always on hand to help when questions arose.

One trainer in particular, Mostyn (pictured with Dylan), served as a real mentor to Dylan. As someone that is easy to talk to, Mostyn helped Dylan focus, put his head down and get projects done. Equally importantly, Mostyn was practical in his assistance, as he would push Dylan to solve problems for himself and guide him on what he needed to improve on, rather than simply just doing it for him.

With the apprenticeship under his belt, Dylan wants to extend himself by taking on roles with added responsibility. He feels he now has the knowledge and motivation to move into a team leader role, and is excited by the possibility of having a team to lead towards the delivery of projects.

Dylan now is looking forward to building his career in the construction industry thanks to his apprenticeship with ATEC.
Author:ATEC
Subscribe via RSS
Tweet